NFC (Near Field Communication) is a technology that is widely used. Some of NFC's applications include wireless access control systems (e.g. keyless doors, and locks), and mobile device payments (e.g. store registers that receive payment information via a phone application).

The NFC Shield features a transceiver module, PN532, which handles wireless communication at 13.56MHz, this means that you can read and write a 13.56MHz tag with this shield or implement point to point (P2P) data exchange between the shield and a smart phone.

For this new version of the shield we have created a separate, independent, PCB antenna area which allows you to more easily stretch the NFC interface outside of your main circuit enclosure.

Please note that "Not recommended" means that it might have chance to work with the platform board however requires extra work such as jump wires or rewriting the code. If you are interested in digging more, welcome to contact with techsupport@seeed.cc.

Paper Man, an interesting object to interact with Android 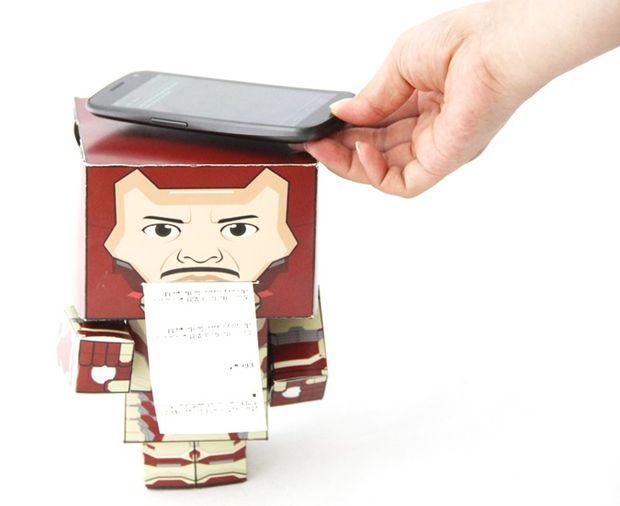 The NFC shield's pins and other terminals are described below. 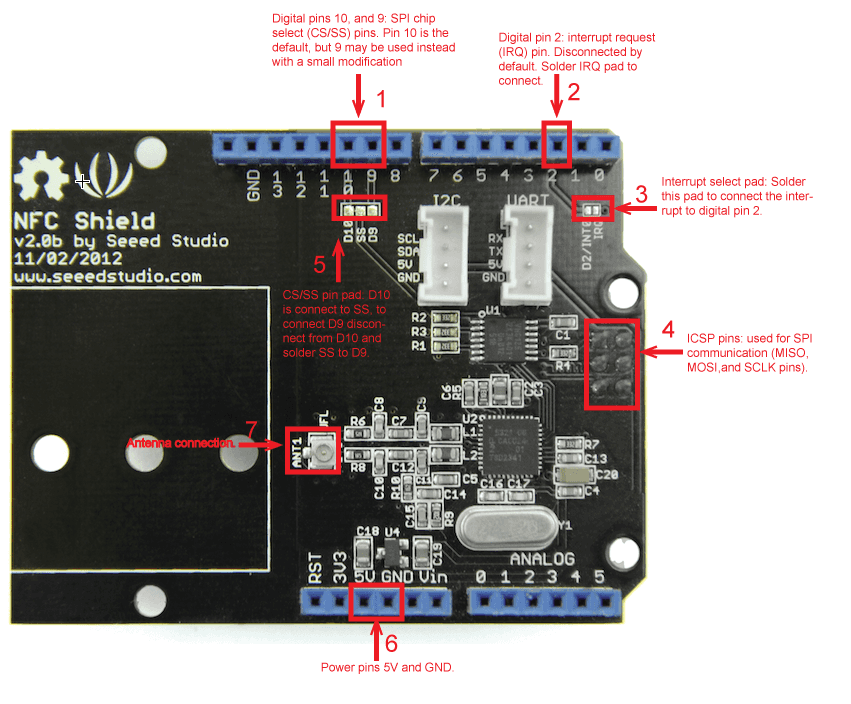 The NFC shield's antenna, included with the shield, is a separate PCB module that is attached to the shield via a cable. The antenna is the area used to receive and transmit information. 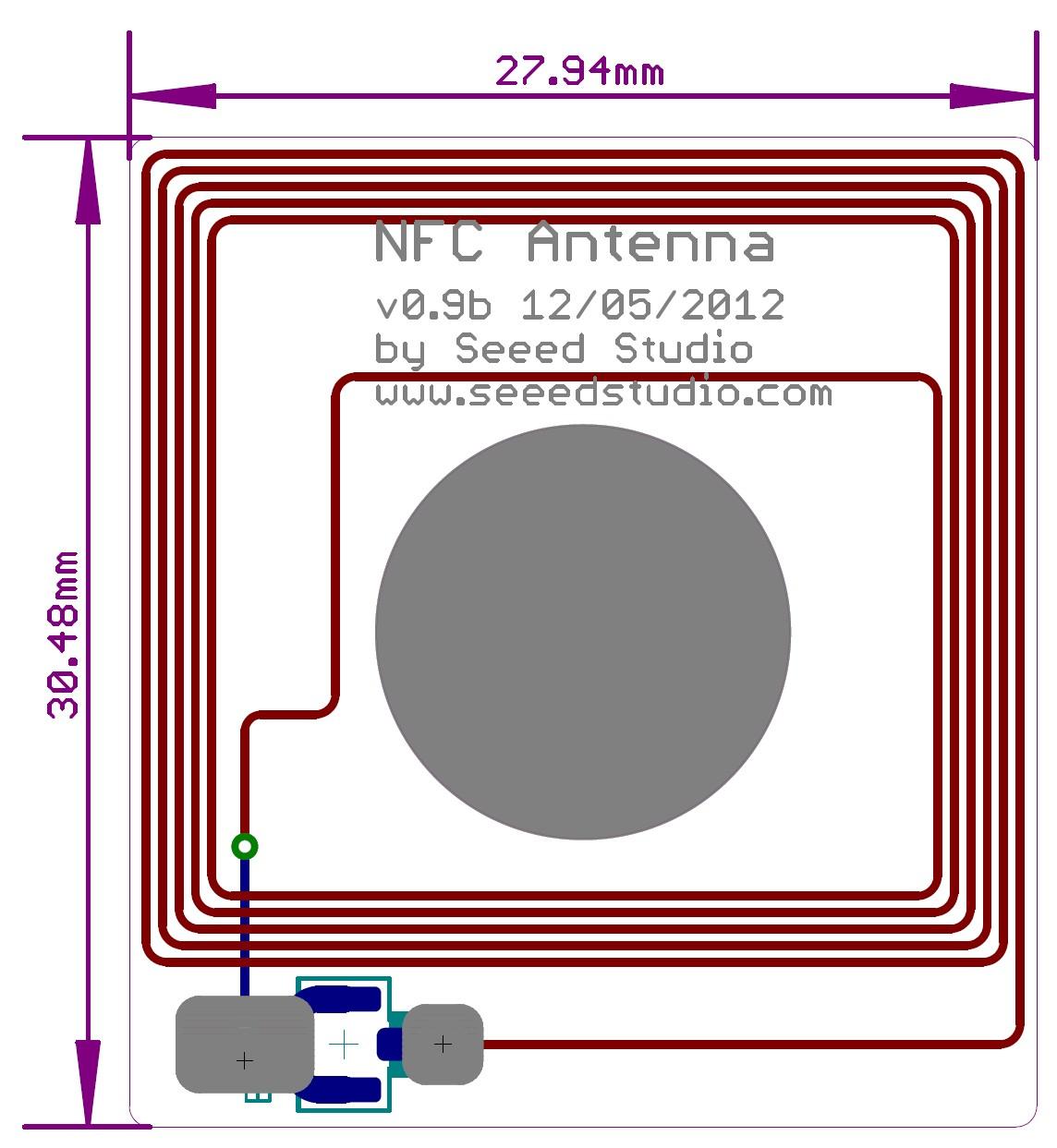 This example will show you how to use the NFC shield to scan an NFC tag and display its information/data.

In the Arduino IDE copy, paste, then upload the code below to your board.

To test the code: 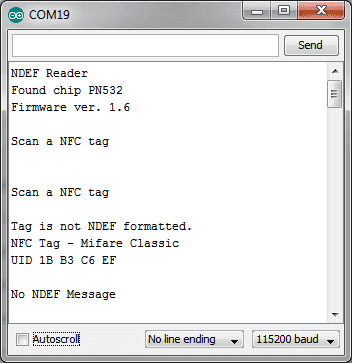 This example will show you how to use an NFC tag as a key to unlock a door or a lock. The door/lock mechanism will be left to your imagination, we'll only cover the NFC part of the code.

Example #3: How to use the Interrupt Pin (Example #2: Revisited)¶

Although the code in Example #2 above does what we need there is a more elegant approach to handling NFC tag detections. In this example we'll show you how to make use of the interrupt pin in the NFC shield so that instead of polling the shield (asking "is there a tag present?") we wait for the shield to tell the Arduino that a tag is available to be read. Why would you want to do this? There are many reasons and interrupts are a whole different topic, but one reason that may convince you is that your project/circuit will save battery since we are not triggering the shield circuit continuously.

The NFC shield’s interrupt pin (IRQ) is disconnect from the Arduino's digital pin 2 (D2), to connect the IRQ and D2 pin together go ahead and solder the pad on the shield labeled "D2/INT0 IRQ".

Upload the following code to your Arduino board:

The serial window from our test of this code is displayed below, yours should be similar. 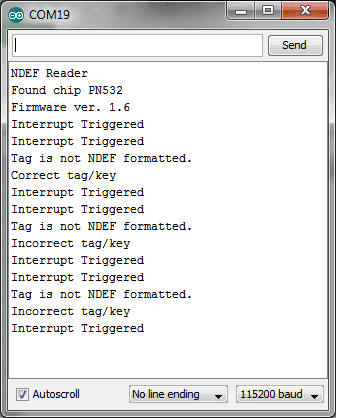 Example #4: Write an NDEF Message to a Tag¶

NFC tags are capable of storing data, the amount of data is dependent on each tag. In this example we will store two strings/messages on a tag, you will then be able to read this message with the code in Example #6: Read an NDEF Message From a Tag.

Upload the following code to your Arduino development board.

If your NFC tag is not properly formatted ("Message write failed" will be displayed in the serial comm window) you'll need to see if you tag can be formatted with the code in Example #5: Format a Tag as NDEF

To test the code above: 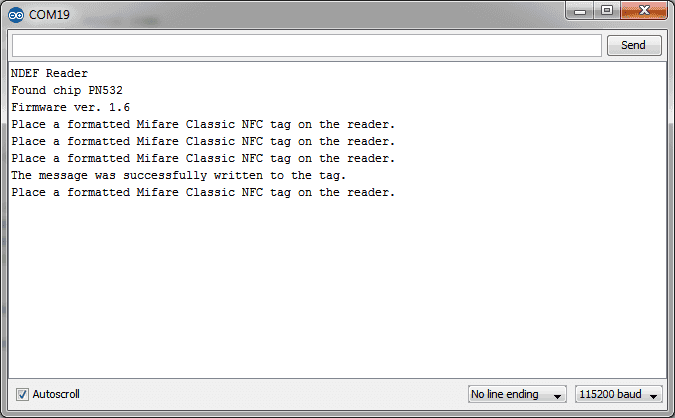 Example #5: Format a Tag as NDEF¶

Your brand new NFC tag might not be NDEF formatted initially. To format a tag as NDEF upload the following code to your Arduino development board:

If your tag failed to get formatted, try again. If it fails your tag is not capable of getting formatted as NDEF. 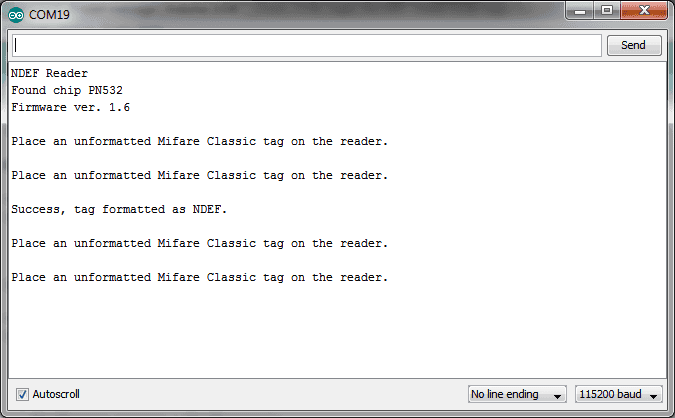 Example #6: Read an NDEF Message From a Tag¶

As you have seen in the example's above, the NFC shield is capable of writing messages to NFC tags. The NFC is also capable of reading NDEF messages from tags, in this example we'll show you how.

Upload the following code to your Arduino development board.

To test code above: 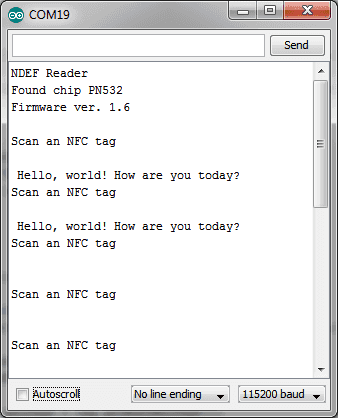 Example #7: How to Change the Chip Select Pin From D10 to D9¶

You can then use the same code in the examples above but with pin 9 instead of 10 for the PN532 interface:

Example #8: Use Two NFC Shields With One Arduino Board¶

You may now create two separate NFC objects, one for each shield, as follows:

Q1: What's the length of the cable? And how long it can be if I want a longer one?

A1: The cable we sold with NFC shield is 12cm. If you want a longer one yourself, please no more than 15cm with a IPX/U.FL connector.

A2: NFC shield v2 is based on PN532 chip. Please note that the design only supports one antenna.

Paper Man An interesting way to communicate with your Android device through the NFC technology.