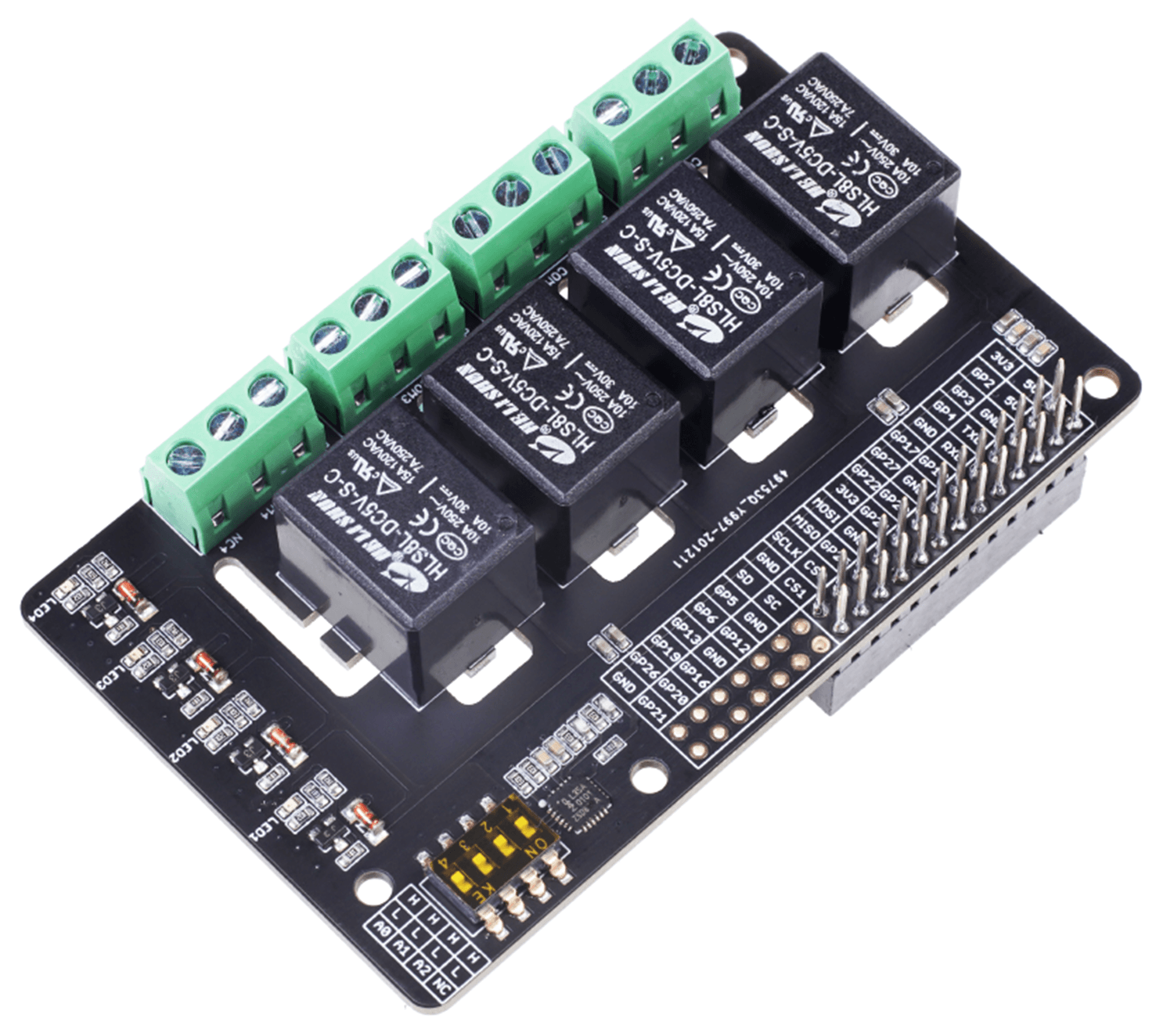 The 4-Channel SPDT Relay HAT for Raspberry Pi utilizes four high-quality SPDT (single pole - double throw) relays and provides NO/NC (Normally Open/ Normally Closed) interfaces that can control the load of high current. This means it could be a nice solution for controlling devices that can't be directly controlled by the I2C bus. The standardized shield form factor enables smooth connection with a Raspberry Pi and it also has four LED indicators that show the on/off state of each relay. 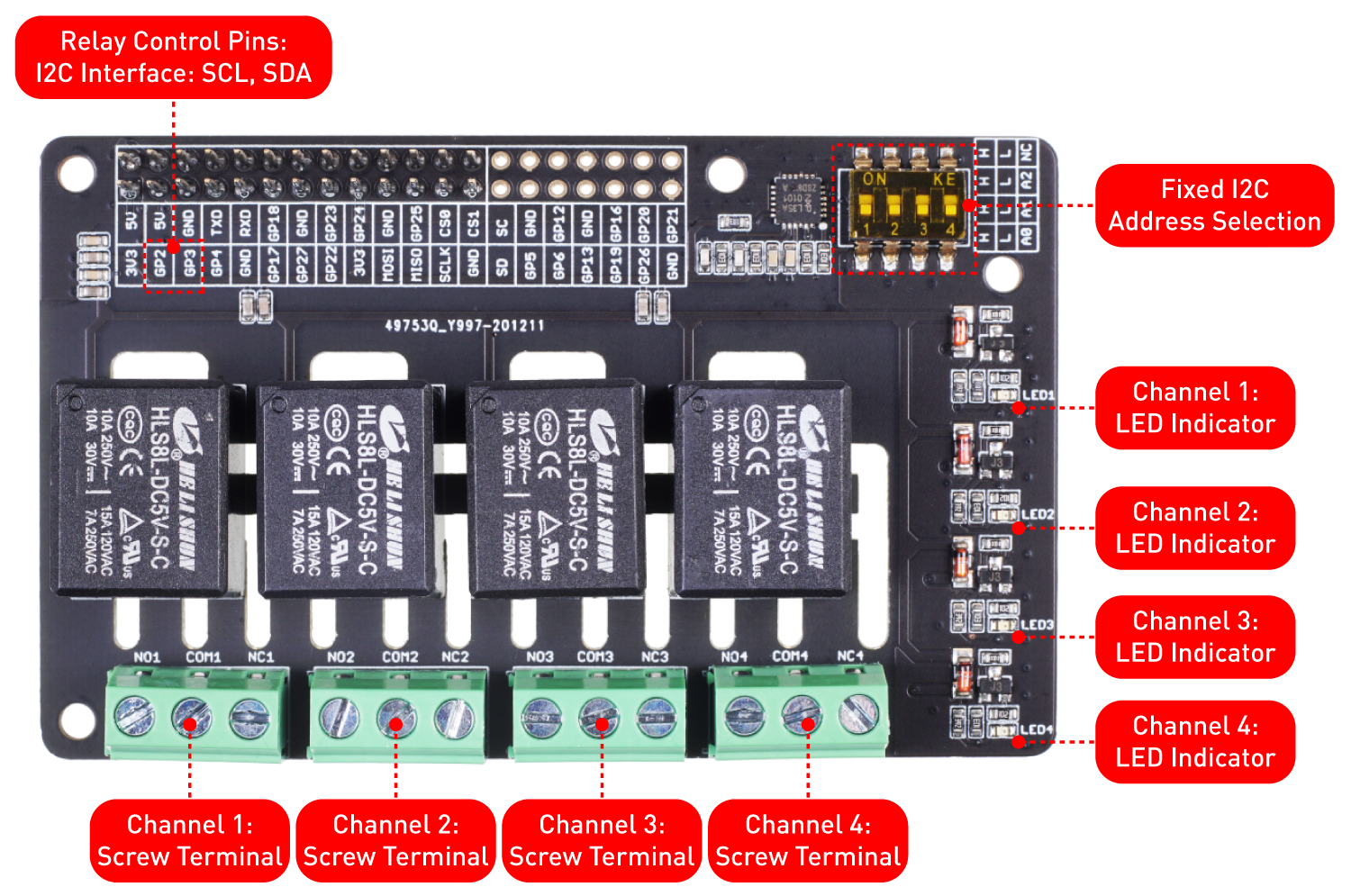 This section was written by John M. Wargo, here we would like to express our gratitude to John's contribution. We have amended the original text a little to fit it in the whole Seeed's document. Please click here to visit the original document on his website.

The steps for installing the board and verifying that it works includes the following steps:

We recommend you putting some electrical tape on top of the Raspberry Pi Ethernet port before mounting the board. If you mount the board without using standoffs (as I’ve done in the example figure below), there’s a chance the board will make contact with the Ethernet port housing and cause a problem. 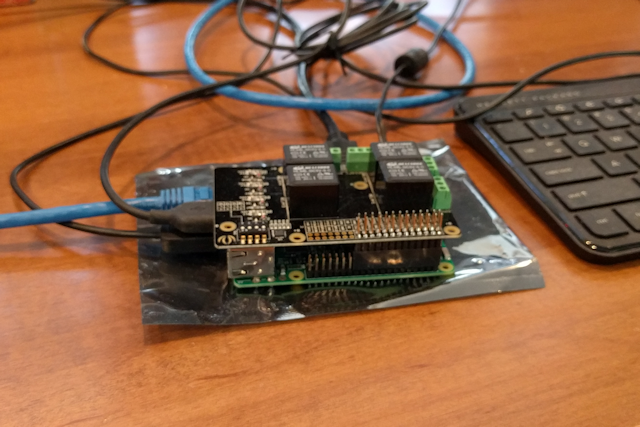 For a production project, We’d definitely recommend using standoffs to hold the two boards in place.

The relay board is configured for an older Raspberry Pi with a 26 pin header, so when you connected it to a Raspberry Pi with 40 pin headers, you’ll need to shift it all the way to the side like We’ve shown in the figure. If you don’t align the pins correctly, you’ll have problems later as it simply won’t work.

The relay board communicates with the Raspberry Pi through an I2C interface https://en.wikipedia.org/wiki/I%C2%B2C. This interface is disabled by default in the Pi’s Raspbian OS, so you’ll have to turn it on before you can use the board. Power up the Pi and let it boot to the graphical interface. When it’s up and running, open the Pi menu, select Preferences, then Raspberry Pi Configuration as shown in the following figure: 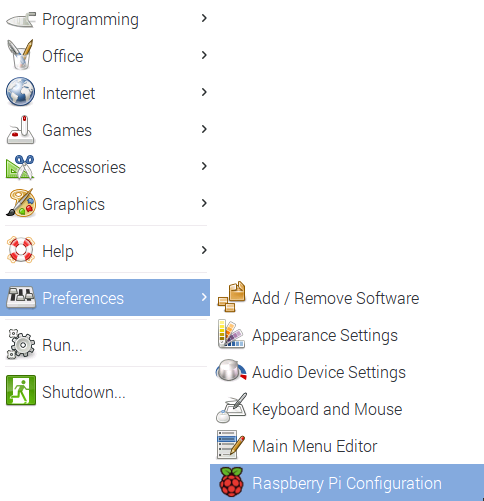 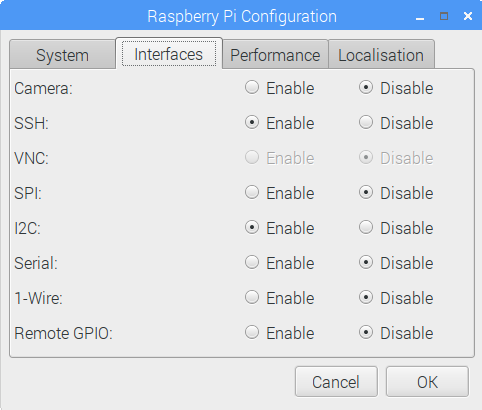 With the I2C interface enabled, it’s time to make sure the Raspberry Pi sees the relay board. Open a terminal window on the Pi and execute the following command:

The application will display a dump of the recognized I2C devices as shown in the following figure. In this example, there’s only one I2C board on the system, the relay board configured at an address of 20. You’ll see how this value is important later in this article. 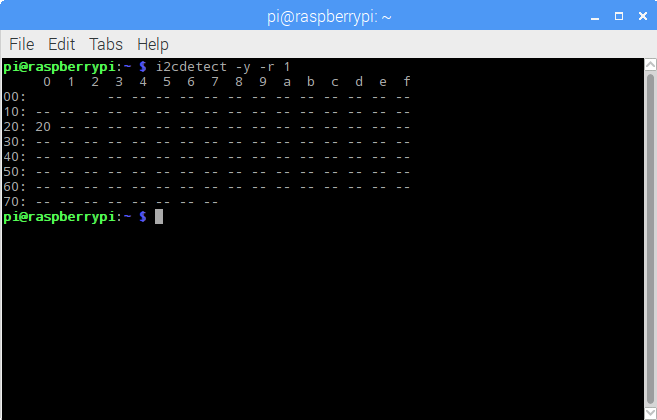 You’re supposed to be able to use switches on the relay board to set the I2C address, there are 4 DIP switches on the board, let’s see what happens when you change them.

There are four switches, three labeled A0 through A2, and one labeled NC. The NC means No Connection. Each switch has a high and a low setting, so the following table will lay out how to use them to set an I2C address for the board:

Please use the test code from github repository. Grab the code from there and you’ll be able to easily complete the following step.

To run the test application, open a terminal window, navigate to where you’ve extracted the sample application and run the application using the following command: 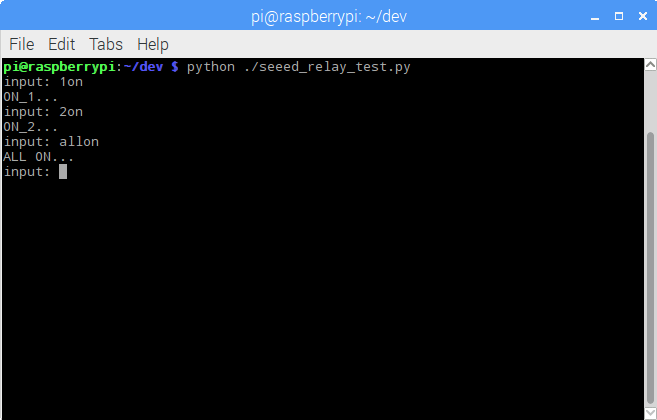 When prompted for input, you’ll type commands to turn the relays on and off:

This exposes a series of functions to your application:

The module exposes a configuration value you will want to keep in mind as you work with the board:

Remember that value? 20? The board defaults to this address. If you change the switches on the board, you will need to update this variable accordingly.

To see the module in action, open a terminal window on the Raspberry Pi, navigate to the folder where you extracted this repository's files, and execute the following command:

The module will write indicators to the console as it performs each step as shown in the following figure: 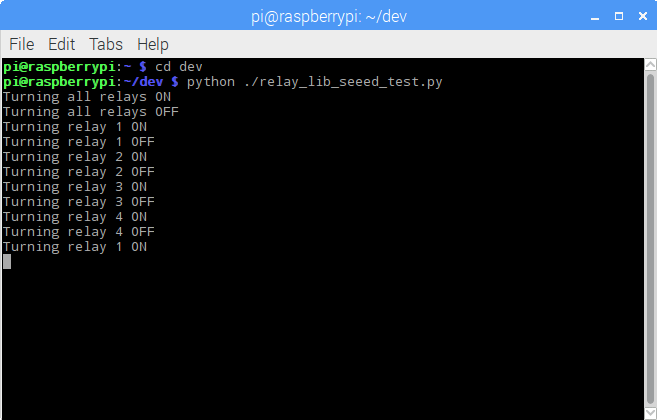 LEDs on the relay board (one for each relay) will illuminate when the relays come one. On my board, they weren't in sequence, so don't expect them to light in order.

The code that does all this looks like the following:

That’s it, that’s all there is to it. Enjoy.