What is the Grove System?¶

Grove is a modular, standardized connector prototyping system. Grove takes a building block approach to assembling electronics. Compared to the jumper or solder based system, it is easier to connect, experiment and build and simplifies the learning system, but not to the point where it becomes dumbed down. Some of the other prototype systems out there takes the level down to building blocks. Good stuff to be learned that way, but the Grove system allows you to build real systems. It requires some learning and expertise to hook things up.

The Grove system consists of a base unit (stem) and various modules (twigs) with standardized connectors. The people originating the Grove system (Seeedstudio) have tried to use "stems"and "twigs" as part of the Grove lexicon. After a short period of consideration, we are dropping those names. They just aren't needed and just confuse the issue.

The Base unit, generally a microprocessor, allows for easy connection of any input or output from the Grove modules. And every Grove module typically addresses a single function, such as a simple button or a more complex heart rate sensor.

You don't need a Base unit to connect up to Grove modules. You can use a cable (Grove to Pin Header Converter) to run from the pins on the Raspberry Pi or Arduino to the Grove connectors.

Here are some project made with Grove for your reference, more projects please refer to Recipe or Instructables.

Here are the dimensions. 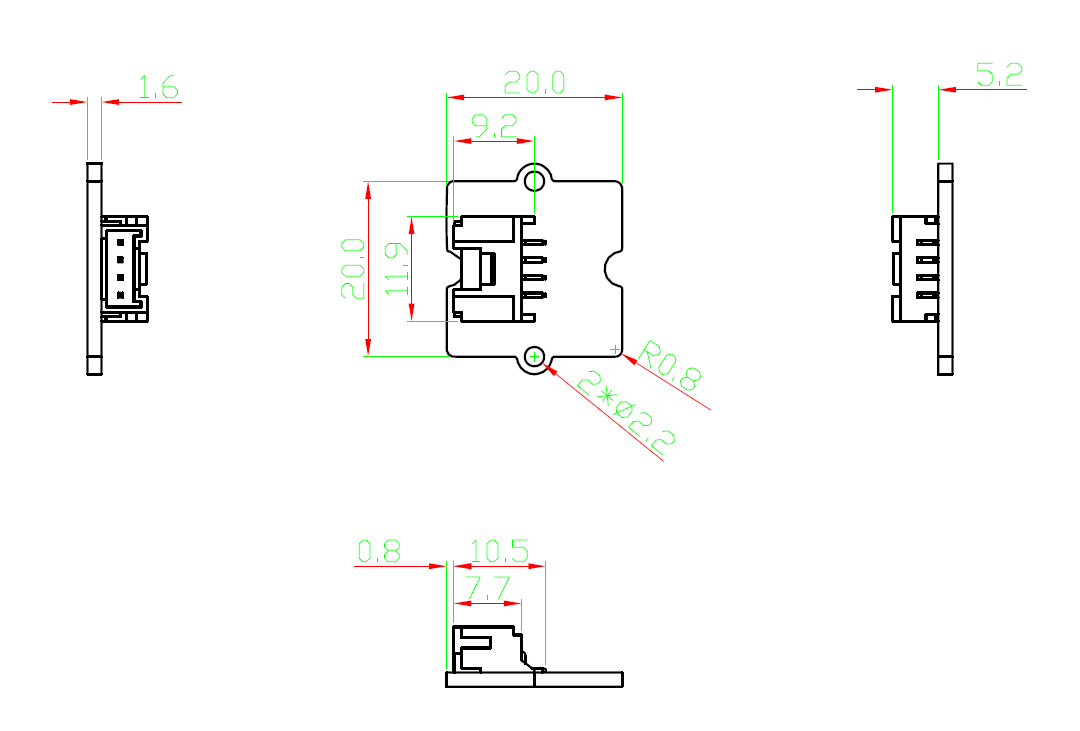 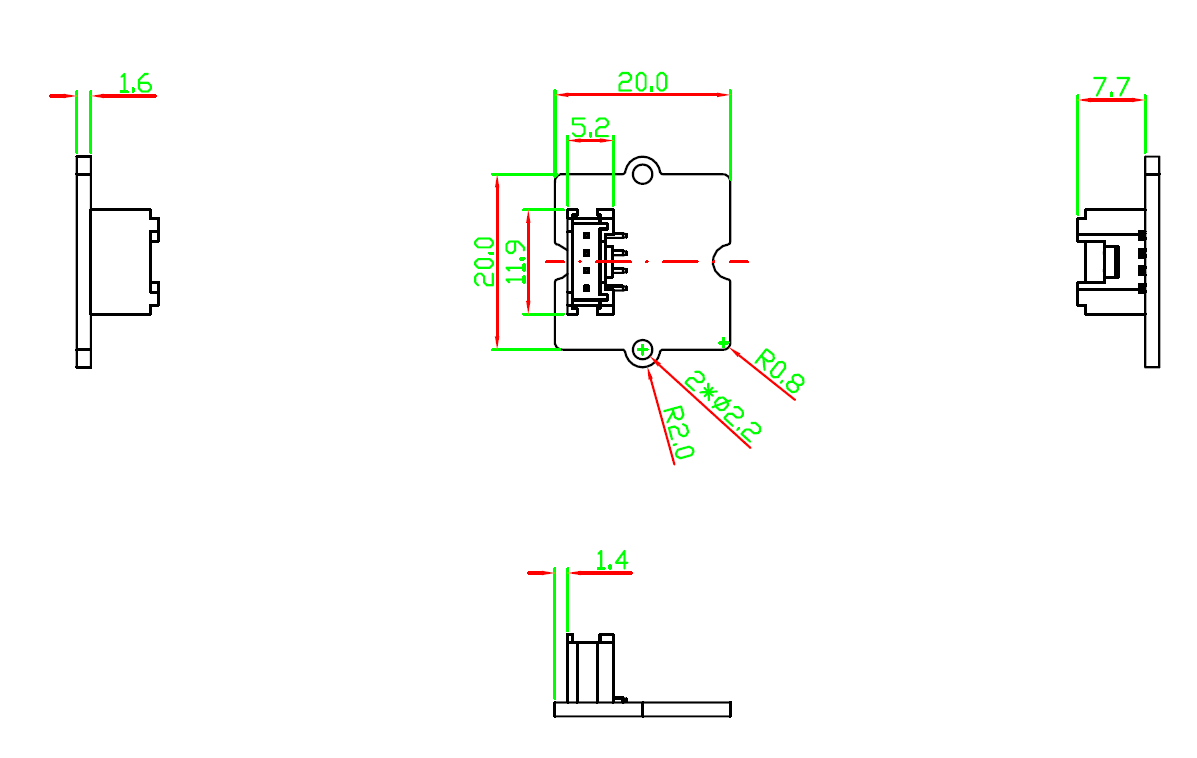 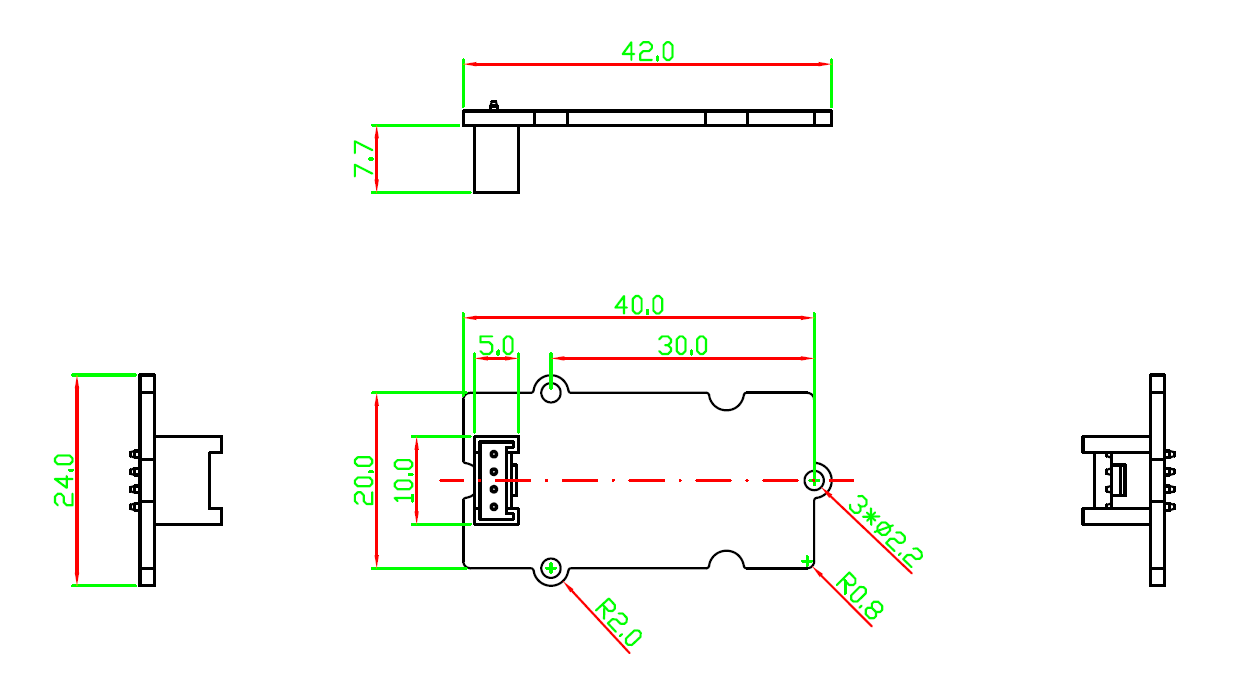 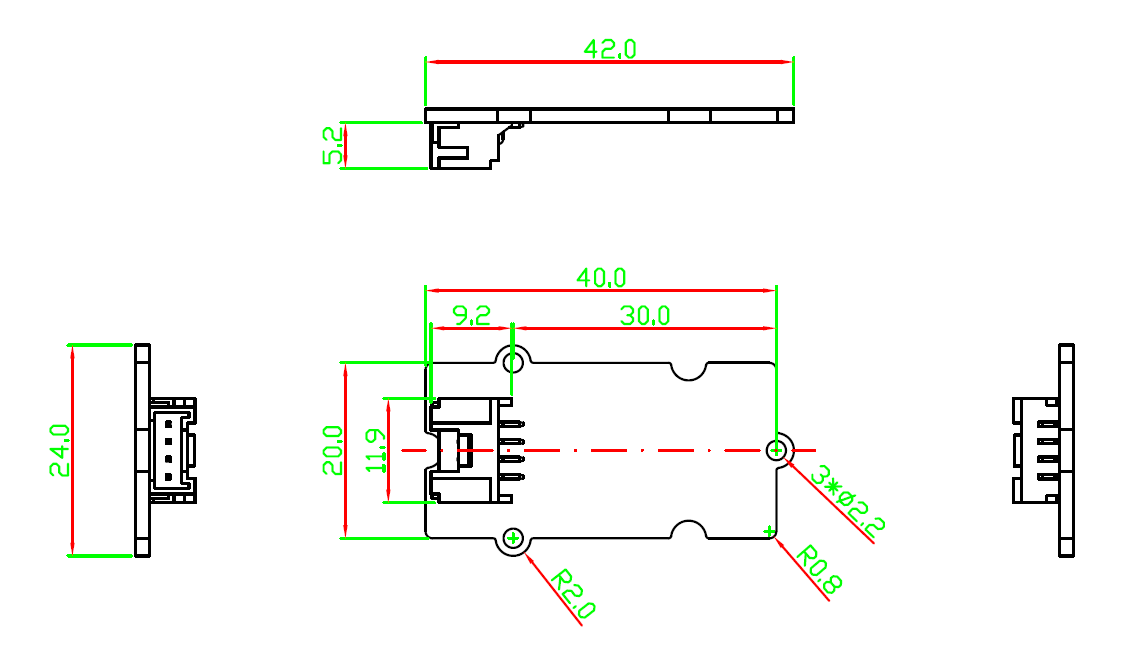 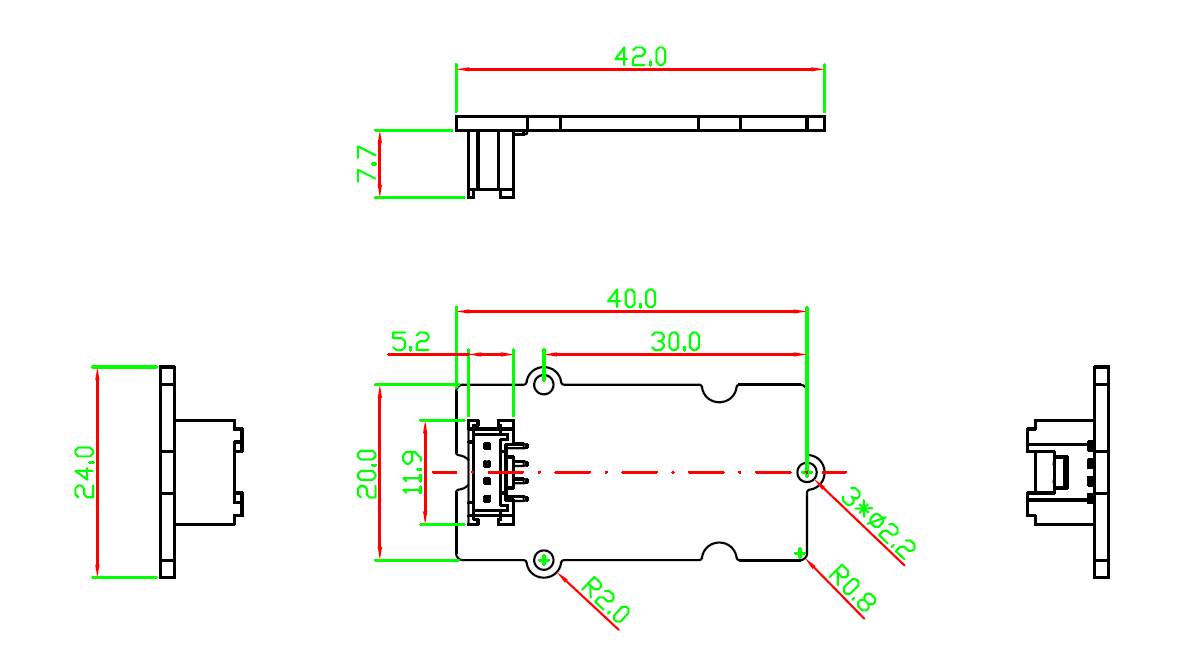 How to connect Grove to your board¶

Arduino Base Shield works for:

You may notice that there're 4 color of the Grove cable.

A digital Grove connector consists of the standard four lines coming into the Grove plug. The two signal lines are generically called D0 and D1. Most modules only use D0, but some do (like the LED Bar Grove display) use both. Often base units will have the first connector called D0 and the second called D1 and they will be wired D0/D1 and then D1/D2, etc.

Examples of Grove Digital modules are: Switch Modules, the Fan Module, and the LED Module. In Figure 8, you can see what the Grove connector looks like on the schematic for the LED Grove module. They range from the simple to the very complex.

An Grove Analog connector consists of the standard four lines coming into the Grove plug. The two signal lines are generically called A0 and A1. Most modules only use A0. Often base units will have the first connector called A0 and the second called A1 and they will be wired A0/A1 and then A1/A2, etc.

Those long term readers of this blog know that our favourite devices are I2C sensors. There are many types of I2C Grove sensors available. Most are 5V/3.3V devices, but there are a few that are only 3.3V or 5.0V. You need to check the specifications.

The Grove I2C connector has the standard layout. Pin 1 is the SCL signal and Pin 2 is the SDA signal. Power and Ground are the same as the other connectors. This is another special version of the Grove Digital Connector. In fact, often the I2C bus on a controller (like the ESP8266, Raspberry Pi and the Arduino) just uses Digital I/O pins to implement the I2C bus. The pins on the Raspberry Pi and Arduino are special with hardware support for the I2C bus.

Grove Branch Cable is a cable used in the Grove system. It consists of three male-type latching connectors and four color-coded wires. Grove Branch Cables can be used to support daisy-chaining multiple Grove devices to a Grove shield. Typically, one end is connected to a Grove shield, and the second and third connectors are attached to two Grove devices.

As with other members of the Grove cable family, the male connectors are keyed. This means that they are shaped uniquely and will fit one and only one way into their matching connectors on shields and devices. Also, when attaching the connectors to shields or devices, be sure to press firmly to mate the male connectors on the Grove Branch Cable with the female receptacles on the Grove shield or Grove devices. Since Grove Branch Cables have latches (sometimes referred to as "buckles" or "buckled cables"), when the latch closes, you will hear a small sound and should see the latch close over its corresponding part. These latches (or buckles) improve connections, and are especially handy in high-vibration or production environments, since some force must be used when disconnecting the cable. When moving your Grove device, or changing it, you must also apply a small bit of pressure to release the latch on the Grove Branch Cable connector, and then pull to remove the it from the receptacle or socket.

The four pin keyed connector of the Grove Branch Cable for Servos will usually be connected to a Grove Shield digital socket such as D2-D9. When connecting servos, make a note of the wire color of the digital PWM cable (yellow or white) to know which digital pin corresponds to the servo input.

You can use it for:

Link to buy a cable¶

There are 4 kinds of Grove connectors in our Bazaar: Universal 4 pin connector 90°, Universal 4 pin connector, Arduino mkr connector carrier (Grove compatible) and Grove Qwiic Hub Compatible with Grove/Qwiic/STEMMA QT Modules & Controllers. The universal 4 pin connector is used on Stem, Twigs and the Grove cables, the pin spacing is 2mm while Arduino mkr connector carrier is the perfect companion for Arduino MKR boards and a Grove ecosystem. Additionally, Different from our Grove system, Qwiic is an I2C interface system initiated by Sparkfun around 2017, using a 4pin JST SH 1.0mm connector. STEMMA QT initiated by Adafruit is cross-compatible with Qwiic, as they use the same connector/cable. To better support different types of interface systems, we provide Grove - Qwiic Hub, which enables you easily connect the I2C devices with Grove/Qwiic/STEMMA QT interface, get the best use of your devices/controller of different interfaces. And Grove - Qwiic Hub allows you to either use Qwiic/STEMMA QT modules on Grove controller or use Grove modules on Qwiic/STEMMA QT controller. You can cascade connect more than one Qwiic/STEMMA QT and Grove modules in one I2C bus with Grove - Qwiic Hub.

We designed many kits for the beginner. Normally, a Grove starter kit include a Grove Extension Board, many Grove modules and a user manual, which include many lessons for the beginners. If you want to start a platform or just learn about electronic, Grove Starter kit is your best choice. 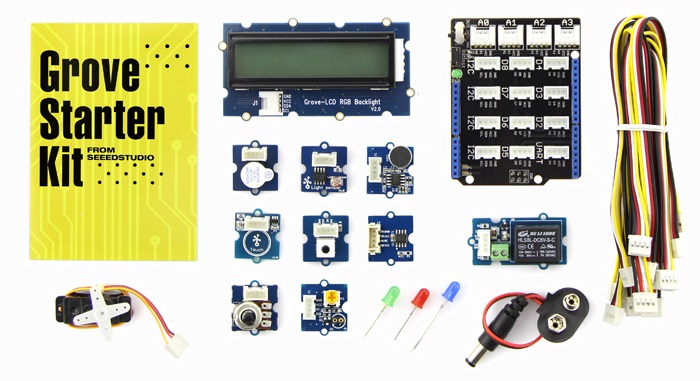 There are many kits for different platform.

Want some Grove modules for your project? Here are some recommendations, more products please refer to Bazaar or Bazaar-Grove.