This is an easy-to-use logic controller which implement logic AND and logic negation. It is designed with H Bridge which get certain drive function to drive motor and other applications, now your application will not just limited on LED applications. If you are a novice to programming and inclined to make a simple application, this will be smart choice to get something started.

Here is block diagram of Logic_DC_Jack module which consists of following parts. 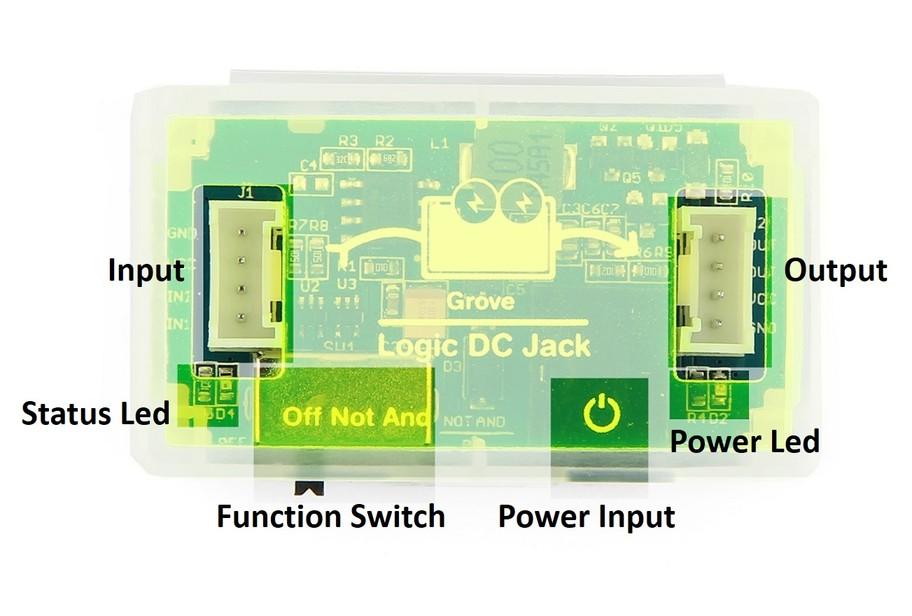 Note: When in AND Mode, IN2 is default to HIGH, so when it's only one input module, Logic DC Jack act as a buffer

After this section, you can make Logic DC Jack run with only few steps.

Logic DC Jack is a logic device, which's used to achieve some simple logic function.Please refer to these links to know something information about [NOT gate](https://en.wikipedia.org/wiki/Inverter_(logic_gate) and AND gate before we get started.

This module includes two type of cables and you will use one of it while plugging an input or two inputs onto the input port.

Situation 1 – One input
If the input is only one module, the Logic DC Jack can realize the logic function of AND and NOT. Following is the figure of logic function:

Situation 2 – Two inputs
If the inputs are two modules, this Logic DC Jack can only realize the logic function of AND. Following is the figure of logic function:

Choose the number of input first and then adjust the switch to a right position, the needed logic function is confirmed.

How to judge the input port and output port ?¶

There're two arrow seals on the shell, you can distinguish the input and output easily.

How to know the default input level ?¶

In this demo, we use Grove - Button as INPUT, and Grove - Red LED as OUTPUT.

Switch to NOT gate. 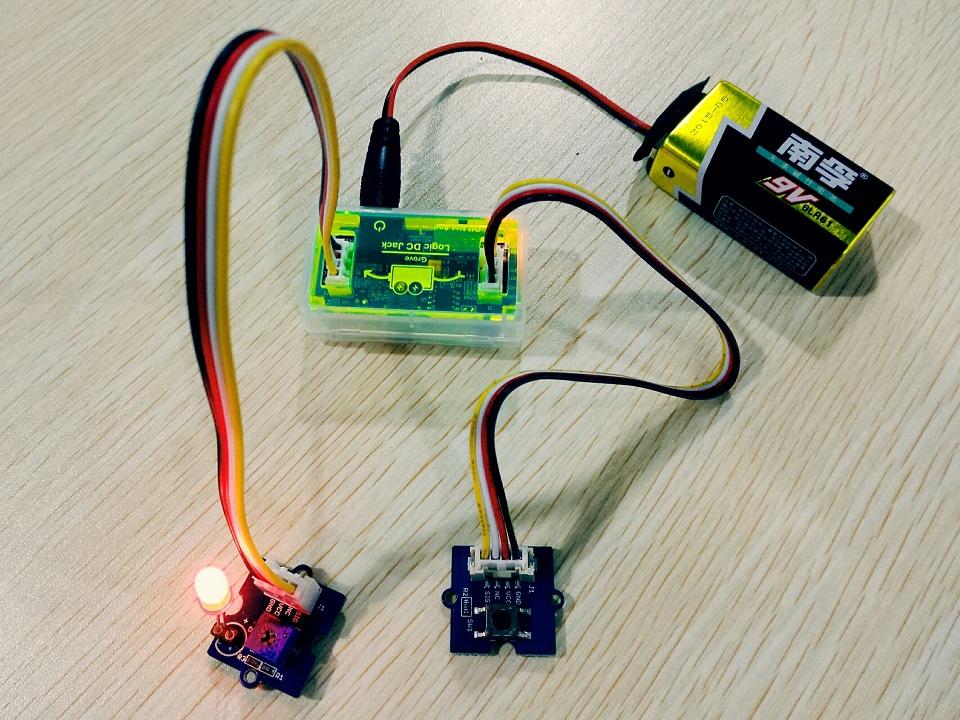 If you want to use two inputs, you need the Grove Branch Cable.

With this cable, you can connect 2 Grove to the INPUT. One connect to Input1 and the other to Input2.

Here is an example, 2 Buttons INPUT and a LED OUTPUT: 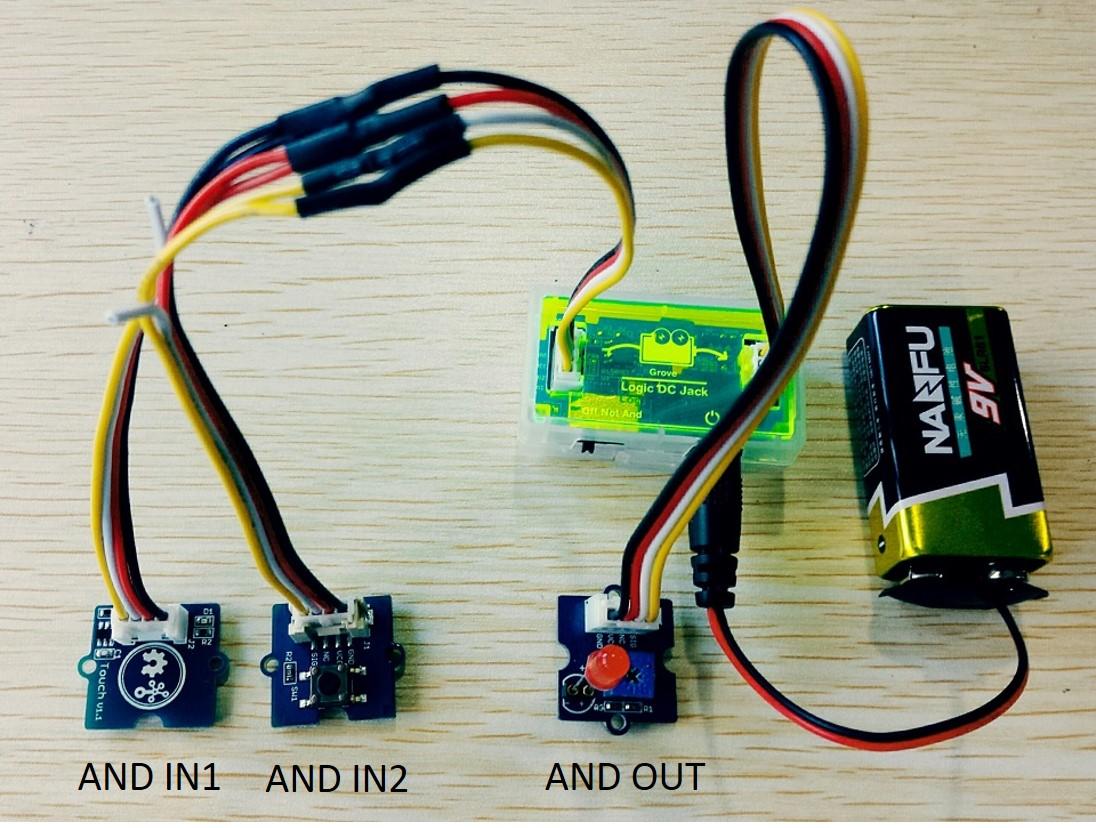 The led will on only when 2 buttons pressed.

About the Grove Base that compatible with Lego, it's coming soon.

Here is a demo: 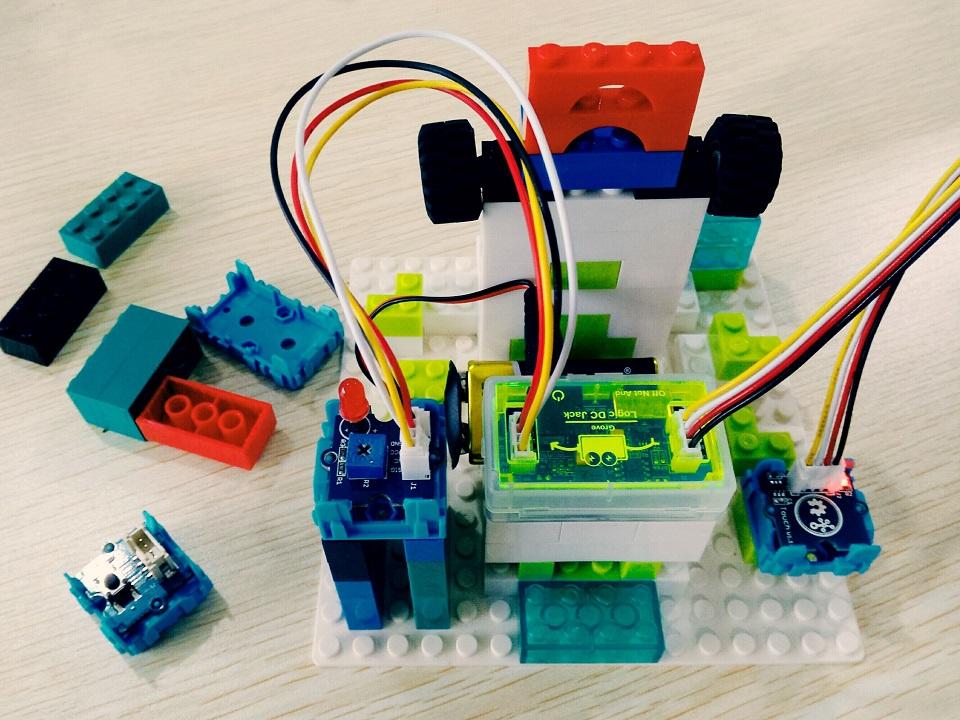 Below Groves can work with Logic DC Jack well: