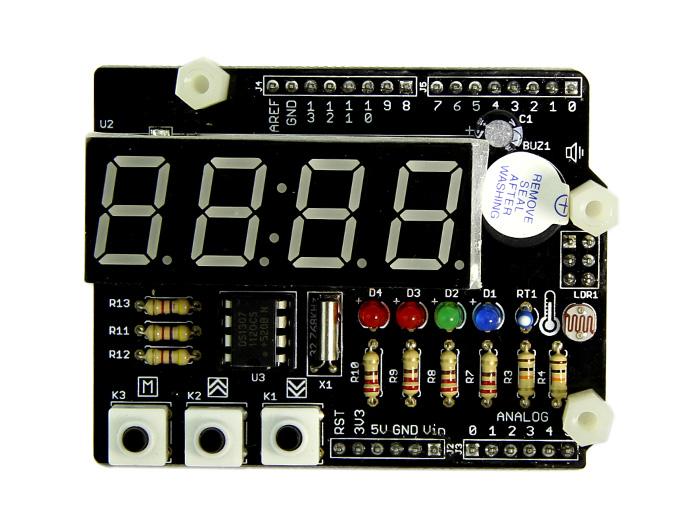 Starter Shield is a perfect start for beginners of Arduino world. You can learn basic soldering tricks and practice programming principles when learning this kit. Have prepared a detailed soldering guide and a fully supported library of programming examples from easy to difficult. , so electronic could be fun even if you have bare technical knowledge, Hope you have fun and gain some knowledge with this kit!

This is a example How to make tiny tiger Machine used by Starter Shield. 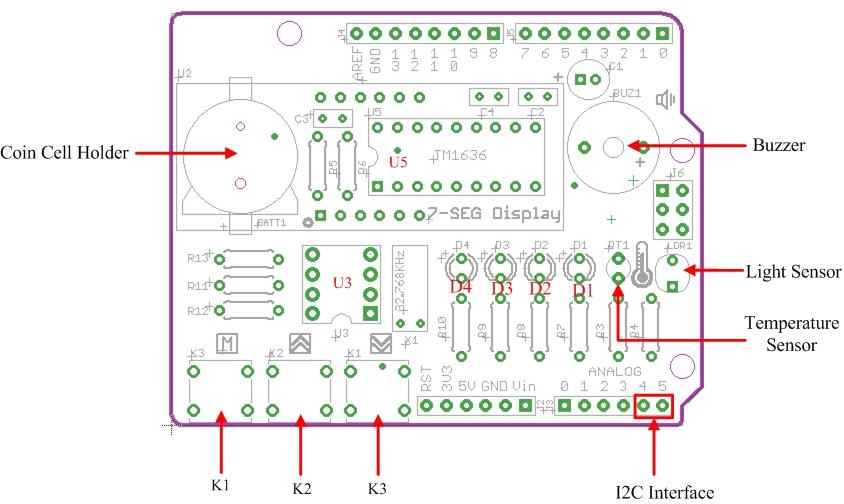 You are supposed to finish the soldering of your Tick Tock Shield before moving on to following demos. If you didn't, click here to download the soldering guide.

Here we start to present you 7 demos from easy to difficult. They involve usage of all hardware resources on Tick Tock Shield:

Each demo caontains detailed comments in the .ino file. To figure out how every line affects the turnout, you have to study the sketch and comments carefully.

OK, let's check out what the Tick Tock Shield is capable of. 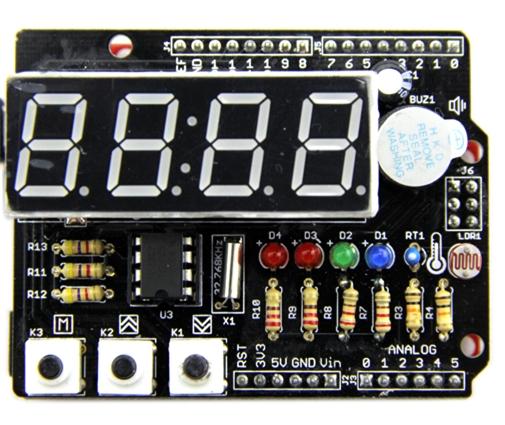 Preparation: Install the Hardware and Software¶ 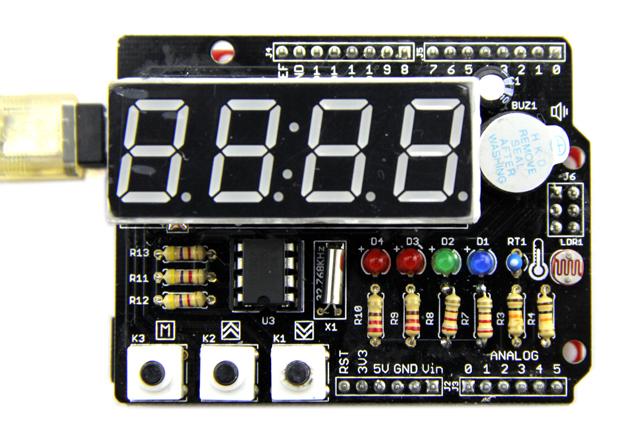 1) Libraries MsTimer2 and Timerone are packed in Tick Tock Shield Library we prvide above. We download them from Arduino website. If you already have them in your libraries file, them no need to add them once again.
2) Through all 7 demos in Tick Tock Shield library, we define:

From easy to difficult, we prepared a series of demos for you to explore what your Tick Tock Shield is capable of. Follow me to have fun with it.

1. This demo only involves the usage of the most basic actuator - LEDs.
2. Restart the Arduino IDE. Open the example "RunLED" via the path: File --> Examples --> TickTockShield--> RunLED. ![](https://files.seeedstudio.com/wiki/Starter_Shield_EN/img/Open_RunLED_Code.jpg)
3. This demo can sweep 4 LEDs with a settable speed. You can change the sweep speed by changing the parameter of the function "runLED(speed)". Find further illutration of the funtion in its comment.
4. Click the upload button to upload the program to the Arduino.
5. You can see four LED lights turn on and off from left to right at a given speed after the program is uploaded.

This demo show you how to control LEDs with the most basic input - buttons.

Demo 3: Change The Pitch Of Buzzer By Keys **This demo involves how to make a sound with buzzer, and because you have already known how to use buttons, in this demo, we use buttons to increase or decrease the pitch of buzzer.

Get started with sensors. First we have here is the temperature sensor. Try to read its value and display it on the 7 segment display. 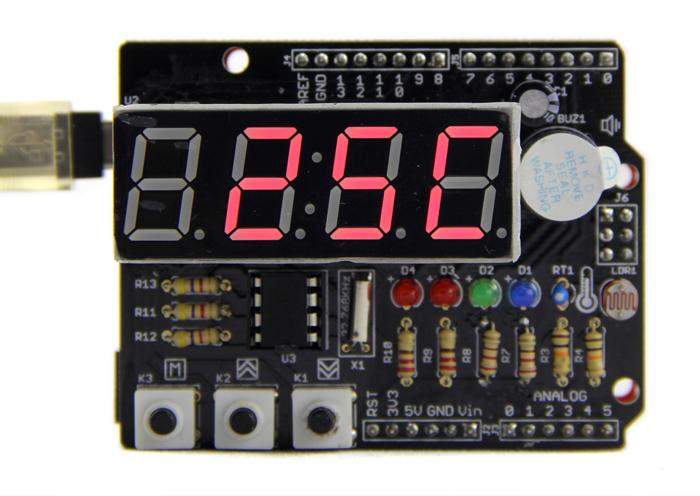 Is it convenient if the brightness of display can auto adjust itself according to the ambient light? This demo shows you how to do this by using a light sensor. 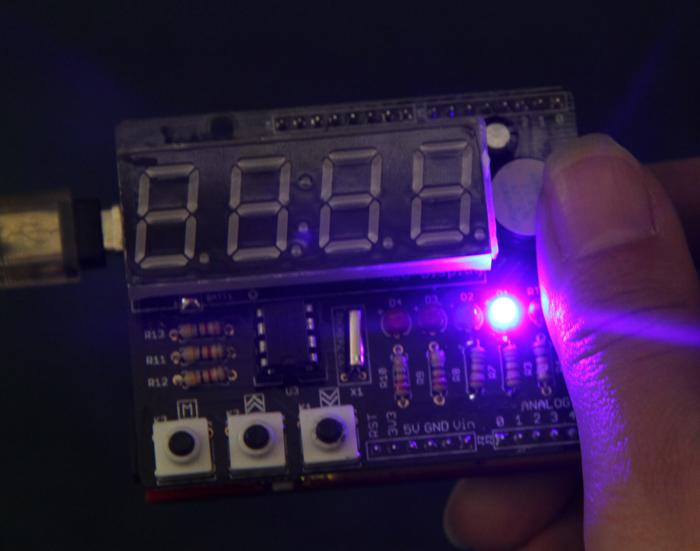 This demo shows you how to control the content of 7 segment display. 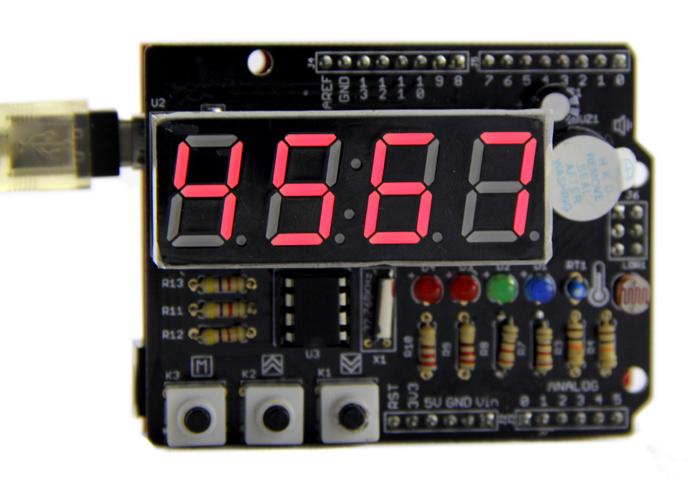 This is a final demo that involves all hardware resources we mentioned above and performs all functions of a real life alarm clock, like time display, making a buzz to get you out of your bed and so on. What's more, because a light sensor and a temperature sensor are added, Tick Tock Shield does more than a normal alarm clock. It can sense the ambient light and auto-adjust the brightness of 7-segment display. Also it can show you the current temperature at a given time interval. 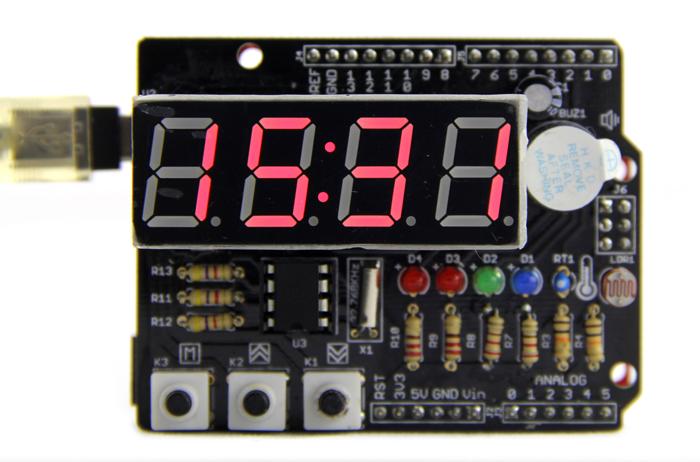 Class Function: Read and write EEPROM of AVR chip. The EEPROM size of ATmega328P Chip is 1K Bytes for Seeeduino V3.0. The contents of the EEPROM you have wrote will not be lost when power off. It is used for saving alarm time and alarm enable flag in the RealTimeClock Demo, You don't need to reset the alarm clock.

1. EEPROM.read(int address); This function is used to read data from a specified address of EEPROM.

2. EEPROM.write(int address, uint8_t value); The function is used to write data to a specified address of EEPROM.

1. tm1636.point(boolean PointFlag); The function is used to turn on or off the clock point (:). This function will come into effect every time the display content changes.

This function sweep 4 LEDs in the direction you choose.

5. setLed(unsigned char led_status, int pinLED); The Function is used to turn on or off an individual LED.

7. ticktockshield.turnOffAlarm(); Turn off the alarm when the buzzer is buzzing.

9. ticktockshield.getAlarm(); Read the preset alarm value from EEPROM and store them into given variables, including the enable flag of the alarm. Example:

12. ticktockshield.scanKey(); Find out which key gets pressed. Return the pin number of the key pressed. And return "-1" if no keys is pressed.

14. ticktockshield.processSystemStatus(); Execute different tasks according to the system status when it's called. The system status can be "adjust clock time" 、 "alarm time", "adjust 7 segment display brightness" and "enable alarm".