The Create USB Interface is an open source microcontroller board that can be programmed in C, BASIC, or Arduino languages. This latest version is called the CUI32Stem, which is designed to work ‘hand-in-hand’ with the GROVE prototyping system including a wide range of sensors and actuators. It utilizes a high-performance Microchip® PIC32 microcontroller, allowing programmable interaction with all sorts of user inventions, no soldering required! :) 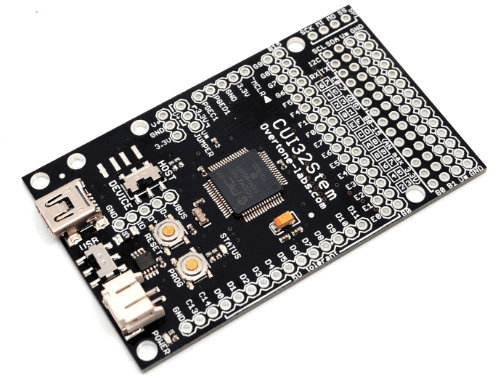 High-resolution versions of these images are available here (Front Side) and here (Back Side). 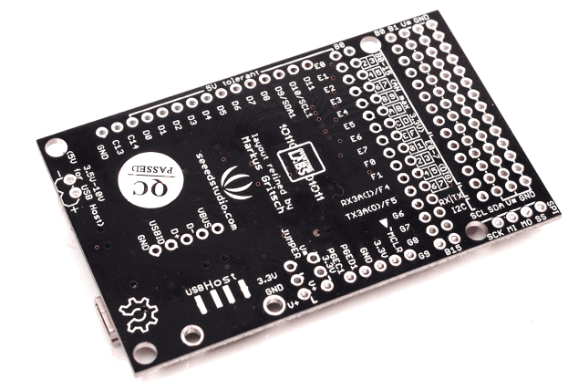 The CUI32Stem can run Arduino code (compiled via the multiplatform ChipKIT MPIDE version of the Arduino IDE), and it also ships with a free Real-Time Operating System called StickOS pre-installed for the quickest path to programming the board (BASIC in a terminal window, no need to install any software on your computer). Both of these features make it very easy to get started if you are new to the world of Microcontroller Units (MCUs). For advanced users wishing to take full advantage of the powerful 32-bit microcontroller on the CUI32Stem*, C-language programs can of course be developed directly in Microchip MPLAB X, which is available for Windows, Mac OS X, and Linux. 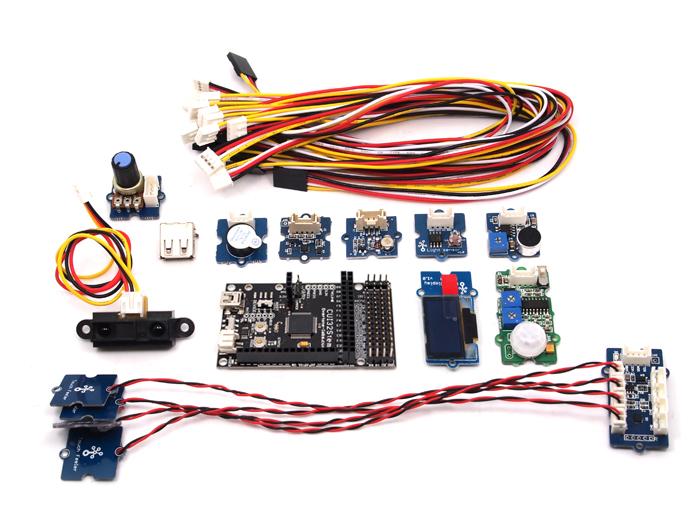 The CUI32Stem is available to purchase alone (headers in a bag, not soldered on, providing a slim profile for low profile mounting locations), or as part of two different GROVE bundles (the first of which is shown above - a larger kit with wireless and more Grove elements is forthcoming). When shipped as part of a bundle, CUI32Stem boards will have pre-soldered header pins on them (allowing simple plug-on / plug-off for GROVE elements). See section below on 'how to buy' for more details. You can choose whether the "V* pins" should provide 3.3V or 5V via the "V* selector" on the board, to correlate to the proper voltage for the chosen GROVE element(s) - non-analog pins on the CUI32Stem are 5V-tolerant (even though the micrcontroller itself runs at 3.3V).

Some of the GROVE elements add wireless features to the CUI32Stem, including Bluetooth and simple 'Serial RF' modules, as well as an upcoming 'Serial WiFi' module that is in design now (not yet released). This Serial WiFi module allows the CUI32Stem to access the internet and/or use the Open Sound Control protocol (OSC) via 802.11 wireless. StickOS supports extremely simple wireless links (see example here) via an add-on board designed specifically for the CUI32Stem called ZigFlea, as well as the possibility for simple data logging to a USB memory stick. There is a footprint for a female USB connector (both on the top and bottom sides of the board, your choice which one to use - female USB connector purchased separately, or included in the bundles) that allows you to use USB-host mode - StickOS includes a FAT32 file system and supports logging data to a standard flash drive.

StickOS, which is pre-installed onto each shipped CUI32Stem, includes an on-board BASIC compiler, line editor, debugger, profiler, and in-line help system to create new firmware programs, save them and run them. All this can be done without having to install any software on your computer, just by using a standard terminal emulator for communication.

Arduino code can be compiled and run on the CUI32Stem using MPIDE (Multi-Platform Integrated Development Environment), which has its own forum. Finally, C-code can of course be compiled for the CUI32Stem via Microchip's own MPLAB X IDE and the corresponding C32 compiler, both free downloads. The 'Microchip Application Library', MAL is also free to download and has quite a few good examples. Further examples for C-code on a PIC32 can also be found [here http://www.schmalzhaus.com/UBW32/].

CUI32Stem is designed to be a brain of the GROVE system

The CUI32Stem is part of the Microcontrollers For Everyone (MFE project), initiated by Rich Testardi creator of StickOS BASIC. The goal of this project is to encourage new sets of casual users, including students, hobbyists, and other non-career users, to learn about, have fun with, and build useful projects with state-of-the-art microcontroller technologies. The goal of MFE is explicitly not to hide or abstract the microcontroller technologies, but rather, to make them more approachable, transparent, and forgiving so that casual users can learn the same fundamental concepts that are used by career users, but without the career investment.

Logging into StickOS is as easy as:

First, open Terminal. If you've never used it before, it's under Applications/Utilities/Terminal. Next, type

Your CUI32Stem board will show up with a similar name to the last one, in that it will include 'tty.usbmodem' in the name.

So now you can just type 'screen portname' followed by return, to show StickOS on the screen. In my case, I typed: screen /dev/tty.usbmodemfa141

After this, you may need to push the enter key again to get the CUI32Stem to send back the welcome message from StickOS...

To quit the screen app, type control-A, then control-.

Final note: This same procedure will also work when you have a GROVE Serial Bluetooth element connected to your CUI32Stem. The only difference is that the name will instead have 'bluetooth' in it somewhere, of course... if you're not sure, just try them all until you find the right one.

Making interactive projects is easy with the CUI32Stem! There are literally thousands of examples available online in the form of Arduino projects that should only require small changes to compile (changing the pin names to correspond to those of the CUI32Stem, etc).

For those curious about BASIC - just starting out or want to give it a try ... How Easy is StickOS, Really?

The following examples, which give immediate results, encouragement, and feedback, use the CUI32Stem as an example of the kinds of trivial things you can do with StickOS. A more complete "Curriculum" will be developed to give examples of working with many of the GROVE elements in the near future.

Line 10 of the program dimensions (declares) a variable named "led" that is bound to pin rd0 of the CUI32Stem, which is configured for digital output; from then on, any manipulation of the variable is immediately reflected at the pin. Lines 20-40 of the program form the main loop of the program. Line 30 simply inverts the state of the led on pin rd0 of the CUI32Stem, inside the loop. Oops! Something is wrong -- the LED isn't blinking but it seems to be half on... Oh! We forgot to add a delay! So let's stop the program with a <Ctrl-C>, fix the program by adding a 500ms delay, and then continue from where we left off: Much better!

OK, now let's get a bit more interactive with the CUI32Stem and stop the program again with a <Ctrl-C>... Then we'll examine the state of the LED (i.e., print the value of the "led" variable) and then blink the LED by hand...

Notice that when we change the variable, the LED changes state!

2 of 5: Blink an LED with a Timer ISR Now that our LED is blinking, let's graduate to using a timer ISR (Interrupt Service Routine) rather than a programmed loop -- this way we can do other things with the "main loop" in the future. We'll keep line 10 of the program, but wipe out all the lines that followed, list the program, and start from there:

Line 10 still dimensions (declares) a variable named "led" that is bound to pin rd0 of the CUI32Stem, which is configured for digital output; line 20 configures timer #1 to pop every 500ms; line 30 enables the timer interrupt and says that every time the timer pops, we should run the statement "let led = !led" (if we had more work to do we could have called a subroutine); finally line 40 just puts the main loop to sleep -- we just service interrupts from then on! Wow, that worked on the first try! :-)

3 of 5: Blink an LED with an Output Compare Module Now that we understand timers a bit, let's try using one of the CUI32Stem's "output compare module" peripherals so we can blink the LED without using the CPU at all! Again, these are all the same fundamental concepts used by career users!!! We have to stop the program again with a <Ctrl-C>, and then we'll just do this at the command line (not even writing a program) because we're a bit unsure of ourselves...

I want to hook up a buzzer to this thing, but before we go any farther, let's try another experiment...

4 of 5: Read a Potentiometer with an A/D Converter For this experiment, we'll hook up the middle lead of a potentiometer to pin an0 of the CUI32Stem, and the outer leads of the potentiometer to ground and 3.3V (of course, you can just plug in a GROVE potentiometer element). Let's again do this at the command line (no program) so we can see how it works:

The first line there dimensioned (declared) a variable named "pot" that is bound to pin 'an0' of the CUI32Stem, which is configured for analog input thru the A/D converter; from then on, any reference of the variable reflects the current number of millivolts read on the pin! Now let's turn the pot a bit and try it again: Cool!!!

5 of 5: Tying It All Together -- An Analog to Frequency Converter! OK, let's replace the LED on pin rd0 of the CUI32Stem with a small buzzer... And now let's write a program using all of the skills we just learned to create an "analog to frequency converter"! We'll start out by wiping out everything we've done so far with a "new" command, and then move from there:

Installation of the MPIDE Multi-Platform IDE to compile Arduino code for the CUI32Stem is outlined here.

Simple C program using MPLAB which toggles the LED depending on a button press: